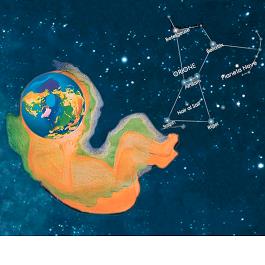 giulianaconforto 27 November 2019 articoli, On Top Comments Off on The real Earth: a giant Baby 25,393 Visti

There is another Earth, invisible but real, much larger than the visible sphere and without gravity. Space probes observe it in Extreme Ultra-Violet (EUV). Its shape, a giant Embryo. Hence the myth of the divine Baby, born in a cave filled with stars – can be real real, combined with the fantastic possibility for us, humans, to participate in Her/His Body.

The two Earths coexist. Yet they have different rotations and states of matter. We, humans, could be specialized cells of the giant Baby, similar to the T cells of our body, capable of discerning what is right from what is bad for each of us and the whole Being. The small visible surface, on which we run and suffer in order to solve the many unsolved problems of our existence, rotates around its own polar axis in 24 hours and is composed of atoms. The vast Earth, observed in EUV, has fluid rotations which imply between 25 and 27 hours to make a full turn on itself; It is composed of plasma and called “Plasmasphere” by sciences.

Is the Plasmasphere a track of One Living Organism?

It is what various prophets and sacred books have already sustained.

An Organism has no boundaries, hence She/He doesn’t use weapons to defend or to offend them. Such an Organism upsets the mental categories that have so far supported our tragic, human history. She/He involves Oneness, Freedom, and independence from the known physical laws, a new and ancient conception of reality quite different from the mechanical one that we have been trusting up to now.

This Huge Organism implies our awareness that one single seed – DNA – has been generating and regenerating all the living species for over a billion years, thanks to the sexual union between a female body and a male one for all of us, humans, and all the mammals as well.

The motions of the Huge Organism can be what we – small humans – can feel as emotions (emo is blood in Greek), i.e. the motions of our blood system that is plasma as well, even sensations spread throughout our body.

Most people are actually fed up with suffering misery and fighting for a handful of dollars, euros, yen etc.

What if we, small humans, were specialized, intelligent “cells” of Her/His Body?

Anyway the Giant Embryo is lying in the equatorial zones, probably coinciding with what  SHE/HE has been hidden by the dazzling flux of copious photons, which flow from the near positive band to the far away negative one, from a remote past up to the present. She/He can coincide with that current of air and sea that “primitive” peoples  have called El Nino.

The feeling of being imbedded into a matrix – a virtual reality – is spreading at present.

For the mechanical sciences the idol is the mass of the bodies, for the finances it is the money, emitted by the banks and, for many religions there is a “good god” who first created human sexuality and has been controlling and/or forbidding it for millennia.

Scientists calculate the masses of planets and stars, trusting the usual theories, based on the belief that gravity is a fundamental, perennial and pervading force. We can now realize that gravity is an emergent force that only appears for peculiar frequencies.  The other Earth has been invisible for millennia, hidden by the dazzling flow of photons that travel from the positive band – near – to the negative band, far away. These two bands have energies millions of times higher than that of the Big Apple – the Earth’s magnetosphere – that catches them.

What if the Big Apple were a 4D holographic TV?

It would imply an Intelligent Design – a Cosmic Game – in which we, humans 4D involves 3 dimensions of space – width, length and depth – and only one of time. It is the space-time that most people consider as objective, independent from the means through which we, observers, observe. Yet spacetime is an effect of the two fields, electromagnetic and gravitational, as Einstein demonstrated with his General Relativity Theory. As long as we observe our sky through scientific instruments, we observe a 4D Holographic Movie. Van Allen belts have energies millions of times higher than those of the Big Apple. Our Big Apple is “poisoned” by these belts and by Energetic Neutral Atoms

The great news is that the Big Apple is going to reverse its own polarity. The North Magnetic Pole is going to become the South Magnetic Pole and viceversa. Various studies report that previoous reversals have taken thousand years. Yet if the next reversal is provoked by the inpendent motion of the Earth’s Crystalline Core