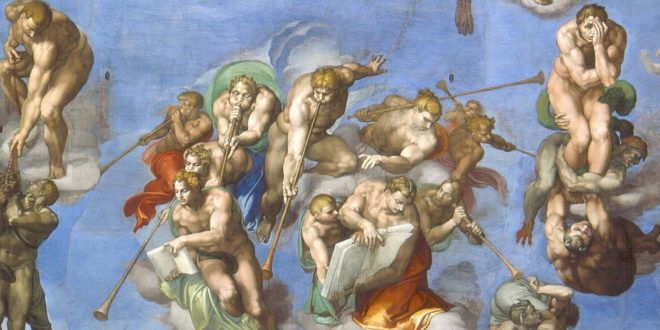 What’s happening in the world? There are confusion and conflicts, increasingly evident lies. The “democracies”, that should be the governments of the people, face struggles, and instabilities that are growing everywhere. Yet these can be the signs of an unprecedented change and the extraordinary opportunity to change “world”.

By “world” I mean the human way of conceiving and managing it. Until recently, this way seemed unique and equal to all the inhabitants of the planet, but the feeling that there is “something new in the air” is growing. It can be due to the very rapid changes of the Earth’s magnetic field, which has crucial, intimate relations with all the “waters”, oceans, atmosphere and volcanic magma, also the liquids that circulate in all the organisms, in particular, the human ones. One is our red blood whose motions are what we can perceive as emo-tions (“emo” is blood in Greek). Our red blood contains iron, the chemical element that has ferromagnetic relationships with strong magnetic fields. Yet other fluids within our body, such as lymph or white blood,  have diamagnetic relationships with the weak, even ultra-weak magnetic fields. Thus the human body is the seat of relations that can be either strong or weak. The former is linked to anger and conflicts, the latter to respect and friendship, both ultimately dependent on one’s own will.

For millennia a few strong have dominated and many weak have suffered, in all the different political regimes. The big news is that the geomagnetic field – stable and weak for at least 40 thousand years – is suddenly, becoming unstable, weaker and weaker, so much as to manifest a “second” ultra-weak field that has extremely rapid variations and evident effects on all the oceans, as this ESA video shows.[1] These ultrarapid, magnetic changes can also affect the motions of the fluids that circulate into our human body, trigger a phenomenon predicted by the dynamical system theory, quite similar to the “universal judgment” that ancient prophecies had announced.

It is a sudden bifurcation of one dynamical system in two different ‘qualitative’ states or behaviors, crucially dependent on the connection between the two already mentioned fluids (red and white blood) and the third fluid – the cerebral spinal one – which circulates in our spine and brain. These three fluids can connect with each other so as to challenge our common conception of reality. Are the borders among nations real or the effects of our usual belief in “enemies”?  We are all embedded into the Earth’s magnetic field and connected to a wondrous Nature that overcomes all the borders and has no time limits! is so, there is no “divine judgment” but rather a human choice among two different ways of behaving and conceiving the so-called “reality”.

It is the emerging consciousness that “reality” actually is a matrix that is quickly changing and…  fading. [2]

We might participate in many worlds, which are coexistent and gifted with different physical laws simply because they are composed of different combinations of the 6 quarks and the 6 antiquarks recently discovered (see below). The plasmasphere is composed of plasma, the fourth state of matter in addition to the three – solid, liquid and aeriform – ones; it is invisible with our eyes, but it is observed in EUV and it is much larger than the visible Earth. Thus there are two “Earths” that share the same Earth’s Crystalline Core, the Author of the geomagnetic field that has ultra-rapid effects on all the fluids, within and without our human bodies. Common knowledge is based on the division between earth and heaven; it has forgotten the crucial role of the observers, us, humans. We have a very limited sight and trust Space Sciences that only observe the electromagnetic light reflected by ordinary matter, just 5% of the universal mass according to their same calculations. Thus Space Sciences cannot observe the remaining 95% and most people consider them as “certainties”!!!

Like any crystal the Earth’s Crystalline Core surely emits a Music, maybe the Eternal Harmony that witnesses the indissoluble oneness of the entire planet, including the Earth’s surface divided into nations, all armed against each other. We have data and knowledge to recognize the cosmic oneness that we can feel as consciousness. We can finally solve the root cause of all the planetary and historical conflicts: the babel of languages.

Today we have data and knowledge to recognize the unity between Man and Nature, to solve the root cause of all conflicts: the Babel of languages

“What is Life?” By Life I mean the Message or DNA, the seed that has been grounding on the Earth’s surface for at least one billion years, one single seed for all the living species, hence eternal with respect to the lifespan of any single individual. In order to overcome the Babel, we have to overcome the artificial boundaries among the various disciplines and, mainly, recognize their co-authors: ourselves. Life is the Eternal Harmony to which sages and poets have sung praises, the Music of Silence that generates the coherent, spinning dance, involving particles and antiparticles, clockwise and counterclockwise rotations. We now have enough data to realize that this is not philosophy, but the universal Force that physicists have revealed and named “electroweak” about 50 years ago.

This Force has a “light side”, what physicists now call “weak nuclear current”, that is not really “weak”, but very fast, a thousand times faster than the strong nuclear force. Therefore the “light side” manifests itself in fleeting moments, sudden intuitions or deep emotions, the growing sensation that reality is not what appears to our eyes and on TV outside, but what we feel inside.

The “weak nuclear current” can be the other Light mentioned in the Gospels or the light side of the Force, promoted by the Star Wars Saga. Whatever its name, this is able to generate extremely rapid, unprecedented changes in all the magnetic fields with which we all have deep, intimate relations. Being a matter of names and human sensitivity, there is no “scientific” proof. Yet there is a free choice between two main ways of perceiving and behaving, either strong – that is siding with one side and fighting the “opposite” one – or weak, interested in the individual freedom and collective harmony, a new era.

The sudden, rapid variations of the geomagnetic field are like the “trumpets of the apocalypse”, in my view; they announce the imminent revelation of the “Promised Land” that is a new way of conceiving the Earth and, mainly, ourselves. We are not at all dependent on a few “strong” who promote wars and conflicts; we are free from their arrogance and can achieve a new alliance with all Nature that regenerates with love and without fuel, a new, loving and coherent relationship with the eternal, intelligent Force that is Cosmic Life [3]

[3] The invisible plasmasphere is free from gravity, while the visible Earth is the very subtle crust, probably coinciding with the centripetal horizon of the Black Hole at the center of the Earths’ Crystalline Core, as I wrote in my latest book “Cambio di Logica” (in Italian).