“It is the only Force, which moves and links infinite intelligent worlds” wrote Giordano Bruno (1548-1600) announcing the century when the Force would have been discovered.

It is the Force that physicists have revealed in the 80’s and named “Electroweak”. As they say, this Force is the synthesis of two previously known – weak nuclear and electromagnetic – fields, what we might call Its “two sides”. The former is Its light side, since it shares Its same massive messengers, the three vector bosons W-, Z, W+. These three unveil the “secret” of trinity and unity, as they all cooperate with each other so as to send One Message, ultimately composed of nuclear sounds – nuclear motions – which move, animate all the natural bodies.

The dark side is instead carried by photons, evanescent and massless messengers that show many different images of any single body, according to the peculiar wavelengths that we, the observers, are observing. Our human eyes can only see the images in optical frequencies and our minds mistake them for reality.

The Electroweak Force can actually move infinite universes – the infinite possible combinations of the 12 particles and 12 antiparticles, recognized by the physics Standard Model – and It can conduct their respective times. Its light side – the weak nuclear force – is the only one that allows us to challenge the presumed supremacy of the “god” most humans worship on the Earth’s surface. This is linear time, created by the dark side – the electromagnetic field – as Einstein has shown. Just trusting the dark side, that paradoxically appears as light to us, most humans believe that linear time is the basis upon which every thing “must” be calculated (motions of all the bodies, the ones of finance, from wages to profits and, above all, bank interests that determine people’s “debts”. There are infinite universes or else matrices, each being a peculiar combination of particles/antiparticles as the ancient Combinatory Art – practiced in ancient Egypt, Greece and Rome – had already witnessed.
We can see them all with our inner sight, able to use the light side of the Force and so realize that the infinite matrices are all self organized and intelligent, each running with its own  spacetime. Our dreams, poetry, literature and music have always witnessed their existence.
The key problem for all of us is our same faith in an immutable and irreversible arrow of time. This is created by the electromagnetic field, the dark side. This has been dominant up to now, critically depending on the usual scientific method, believing that reality is just what scientists can observe through the electromagnetic light. As a paradox, according to their same calculations the infinite universes or else matrices do exist and are in the future respect to what we feel as present.

The light side can descend from the stars to the stalls, from Its original, extremely high frequencies to the low ones we can only observe. This same Force can provoke crucial effects on the human body and psyche. Why don’t physicists suppose It is Life? Because they believe in one only arrow of time, “forget” that all our vital processes are billion times more rapid than the only rate of time orthodox science measures and economy uses for calculating “our” debts.  The ultrafast speed of our vital processes do witness the wondrous OPERA of the Electroweak Force into every living body. Yet we should finally admit what scientific minds tenaciously refute: the Intelligenceof the Force. The Electroweak Force is one and trine, so meaning that it is carried by three kinds of messengers that physics calls W-, Z, W+. These compose the extremely massive and copious River of Life: W+, W-  are electrically charged, whereas the third ones, named Z,  are neutral and can instantly heal any living body.
Z bosons could be the messengers of what some call “fifth force”, myths and artists have painted as a golden rain, able to fecundate us and let us to reproduce ourselves. It is the living “weak” nuclear energy that also allows us to fulfill the resurrection of the body that is not at all a miracle. It is the healing, natural event that the entire visible matrix is fulfilling.
We are all invited to participate in it so as to evolve and contribute to the new era.

The light side is the wondrous Opera, composed and emitted by the TRUE SUN at the Earth’s center.

Precedente The Earth’s inner Sun
Successiva The Rebirth of humanity 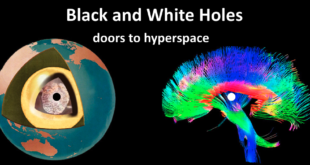