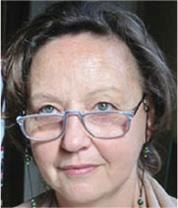 “I studied astrophysics and loved astrology… “opposite” sciences, as they are each studying only one of the two sides of the FORCE and ignoring the other side. Integrating them both means rejoining the various abilities of our brain. We are educated to repress the emotional brain and are therefore “divided” between logics and instinct, hence unable to feel the oneness of infinite universes. Emotions and dreams are very important… At the end of ’91 a dream showed me the opening of a “door” between parallel universes, the beginning of an extraordinary adventure for all humanity. I started to “remember” my past lives and to write books… I was also able to spark off in others the memory of their personal cosmic story. I was a sort of “master” but I also felt my dream, utopia, was a profound, radical change for all the world, the well-being of all… I knew the “way” was within me, but I also felt the need for help and I didn’t know what it could be… Help finally arrived with another dream that soon became reality… I met a “cosmic trainer”, who had already practiced the “way”… So my training began and, being an intellectual, was particularly hard… I had to pass through a “desert land”, leave my previous certainties, surrender to the “impetuous river”, inner truth … I began to perceive the eternal, crystalline universe, which makes all the natural bodies alive. I became aware of our millenary illusion, the false belief that SPACE is reality. Linking new discoveries to my memories I realized what is occurring: it is a nuclear transmutation… A few ones call it the resurrection of the body, others alchemy, others cold fusion. However this activates the latent potentialities of our brain and allows us to evolve, if we want to…

Formerly an astrophysicist, Giuliana Conforto taught classical and quantum mechanics. Deeply involved with Giordano Bruno (1548-1600), she has applied the ancient ART of MEMORY, and so has become able to remember humans’ origins, “see” within and communicate with the “only Force, which links and gives life to infinite worlds” to which the same Bruno and many other sages had sung praises. She’s proposing an anthropic and astronomical revolution, centered on each being’s direct COMMUNICATION with this Force that actually is universal LIFE. It is a “dark energy” that is accelerating the universal expansion, the same one that physicists call electroweak, therefore neither a myth nor science fiction. Scientists cannot realize it is Universal LIFE though, because they use means unable to feel emotions and love, the key expressions of LIFE. Explaining the recent events that sciences call “mysteries” Giuliana Conforto shows the deception of the dominant paradigm, the so called “knowledge” that ignores the meaning of LIFE and binds human emotions to fear. Using the light side of the FORCE – the weak nuclear field – she has realized that we, humans, are immortal, participating in various organic universes, all gifted withconsciousness that is each being’s communiation with the Source of Life.