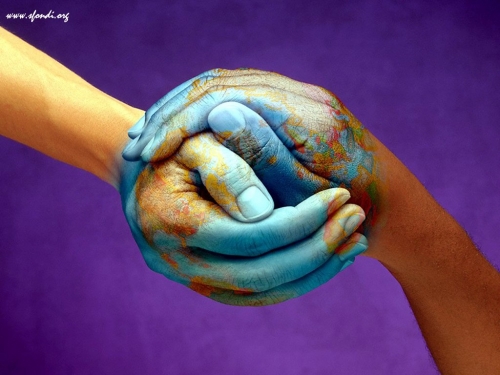 “I am a world citizen, Father Sun’s and Mother Earth’s son” said Giordano Bruno through his exceptional synthesis many people consider as a deep truth.

Yet… what is the world? If we are sincere, we realize we have different views about the world and these do not match at all. A common view is the geopolitical one. Last August, in Teheran, the summit of the 120 Non-Aligned countries rejected the interference of the Aligned countries (70 – among which Italy – out of the 190 UN members). They suggested reforming UNO, an interesting initiative the media did not spread. Given the endless wars, the sorrow and costs that fall on peoples as well as the deleterious effects of UN troops, such a reform is surely desirable.

Is this enough to get peace in the world? I really do not think so. It is fair to reject the interference or even the arrogance of USA, Europe and Israel in the Middle East, but I consider it naïve to trust in the ‘goodness’ of the Non-Aligned nations and specially of the Islamic ones. If we really want peace, it is urgent to discern between peoples, nations and the borders to be “protected” by UN troops or governmental armies. Peoples have neither these borders nor need they to be protected ‘against’ other peoples.

Peoples do not want war. Peoples want to live well, with dignity and prosperity.

What is needed to have a fair world, with no borders or armies? The consciousness that we are world citizens.

We all have the same primary and secondary needs too. We, men and women, all want to be free, to express our creativity, to cultivate friendships and mutual respect, to share happenings, to enjoy nature, to use non-invasive and useful technologies and, why not, to eliminate the inconsiderate use of medicines.

Do you know what all this means in terms of energy as well as happiness?

It means that there are plenty of resources. The biggest energy consumptions actually come from arms and pharmaceutical industries. I do not know exactly how much it is to maintain military aircrafts, but I think it is quite expensive, also considering training and design costs. Redeploying armies in order to improve the environment, canalizing waters, sanitizing water networks, helping people in need – all this is possible. Why do men consider it impossible? Because they identify the world, or better the universe, with the history they were taught at school.

The Big Bang theory, the origin of universe within a few minutes – 13.7 billion years ago – followed by the origin of the solar system within a few days – 4.7 billion years ago, then the abrupt flourishing of Life 2 billion years ago. This mysterious entity, Life, is only present on planet Earth and able to evolve through its own catastrophes until the appearance of Homo Sapiens. Here we are. Are we actually wise (sapiens)? No, we are so ignorant as to believe in the lies we are being told, peculiarly, in the key concepts – space and time – orthodox sciences still maintain at a public level.

“Only one Force, Life, joins endless intelligent worlds ” wrote Giordano Bruno (1548-1600), announcing its future revelation too. A wondrous, cosmic Force was actually revealed in the 80’s and named  Electroweak, but physicists do not suspect it is Life. This Force has two, dark and light, sides and involves an imponent and expansive flux of Z bosons, faster than light messengers which challenge our classical idea of time.

The elasticity and reversibility of time are tested properties at present, but academies and media do not spread them. People might suspect that “real values” such as money, debt, interest, etc. are all based on an irreversible and immutable arrow of time that doesn’t actually exist. This idea of time is just virtual and illusory, useful for maintaining the dominant paradigm that has exploited men’s naive credulity up to now.

Another illusion is space. Since Galileo pointed a telescope toward the sky, space look empty and immense, populated by distant stars and planets, all rigorously lifeless. What has modern astronomy observed for about three centuries? Just the optical frequencies of the electromagnetic field . Thanks to new instruments and spatial probes, we can now see different images of any body, and realize that shapes and mutual distances critically depend on the frequency we choose to observe. For instance the image of the Earth in extreme ultraviolet – the plasmasphere – is 4-5 times larger than the optical one, as I show in my video The star will fall from the sky.

Yet most of us mistake the optical images for the only existing reality. What if the image of the Earth, in ultraviolet frequencies, represented the Promised Land? If it were so, we might realize our millenary deception and why we haven’t seen the other intelligent worlds up to now. Simply because our human sight, the scientific one included, is usually limited to the electromagnetic light that is the dark side of the Force. The so called plasmasphere could actually involve dark matter and dark energy that no scientific instrument can register. The dramatic and conflictual situation of our world depends on a blind culture. Sciences just use instruments that cannot see the other intelligent world and we all, humans, do not use the largest portion of our brain – white matter – that is able to use the light side of the Force.

Therefore we all miss consciousness, the sense of unity that Life has always shown, the instant interconnectedness of many different spaces and times. Please notice that consciousness is not to be mistaken for awareness, nor for channelings which are spreading the fear of catastrophe all over the world. There will be one, it is even ongoing, only in its original Greek meaning – katastrofé – that is deep renewal of a small portion of our brain,  our sluggish mind – grey matter – that mistakes what it sees for reality.

The pictures may not match the real astronomical bodies, especially as the Earth is imbedded into a giant hall of mirrors, as the microwave observations have proved.

Nowadays, there are many novelties which a few people spread, because everyone wholly trusts astrophysics, ignoring that it just observes a half of the electromagnetic field, the one coming from the past. Astronomers do not observe the other half, the one coming from the future, that must exist even according to the laws of physics. The NASA’s THEMIS probes have recognized that huge solar storms provoke spacequakes that are reflected onto the Earth’s nightside at about 2 or 3, as it is shown in this short video SPACEQUAKE _ EARTHQUAKE

As a fact, many people wake up at 3 in the morning with new sensations and/or make dream announcing future events. These facts prove that there is no separation between heaven and earth, past and future; the latter is already there, filled with spaceships and hidden by astonomers’ blindness, at least 96% of the calculated mass, according to their same calculation.

Last 21st September a meeting at the Keshe Foundation (Belgium) took place, where extraordinary technologies have been introduced to many government representatives. It is important to know that these technologies do exist, that they are valid and designed by those world citizens who already travel by spaceship.

Yet, in my opinion, to believe that technology will save us is another illusion. We, the world citizens living on Earth’s surface, will save ourselves on our own, by using  all of our brain and realizing that we have not been seeing the real reality up to now but believed in a science – the Copernican astronomy – which has depicted a 3D-film that is no more valid. Are we just a few? Yes, just a few, yet helpful to everyone.

Life is the Cause of the genetic evolution that is taking place. If it is the gentle, imponent and wondrous Force, physicists call Electroweak, you should know that this Force needs no critical mass, as it is usually believed. It is just suggesting all of us, humans, to evolve and preparing an imminent jump in the future.

The task of the few conscious people is to help other people and themselves understand that the change is mainly a perceptive catastrophe. This is not the end of the world, instead the beginning of a new era when all the world citizens in the heaven and on earth will gather. The revelation of intelligent people is imminent, since the Earth’s magnetosphre is vanishing. It protect us, according to the orthodox sciences. It is not so, in my view. The Earth’s magnetosphere has hidden the future that has always existed on heaven and on the Earth’s soil too, as dreams, sensations, intuitions, human yearning for a peaceful and prosperous world.

So we will finally realize that the Promised Land is neither place nor Israel. It is a “new” way of perceiving that implies the conscious use what we all have: our brain white matter, as I wrote, in my new book, BABY SUN REVOLUTION, that is in Italian and will be published in Italy into the end of 2012.

Precedente Can we win gravity?
Successiva The Earth’s inner Sun